We employ the greatest coaching staff in New England, plain and simple. Our roster of coaches includes college All-Americans, former members of Team USA, professional indoor and outdoor athletes, members of the Lacrosse Hall of Fame and the winningest coach in Massachusetts history. The Kings’ staff has the knowledge and experience to help each of our players succeed at highest levels of the sport. 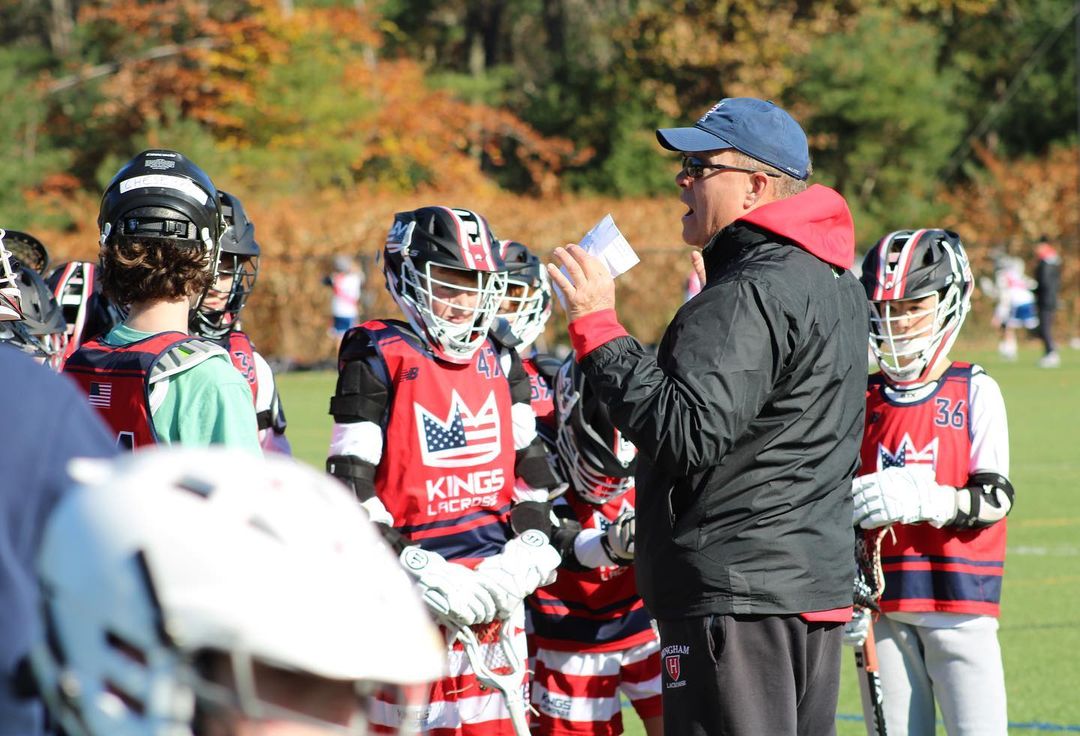 Chris has been playing and coaching lacrosse for thirty years. He grew up in Norwell, MA and played soccer, lacrosse, and ice hockey at Thayer Academy (‘93). He went on to play at UVM (‘97). and was a two-year captain for the lacrosse team as a midfielder. He was selected to the NEILA East/West Game his senior season. Chris started coaching high school in Portsmouth, NH from 2003-2008 and was instrumental in the growth of their youth program. In 2008, the PHS varsity team went to the NH State Finals and he was voted NH Division III Coach of The Year. He moved back to Norwell, MA in 2009 and coached the high school boys lacrosse team until 2013. Chris has been very active in the eastern Mass lacrosse community and is a founding director of Kings Lacrosse.

Greg started his playing career on the first ever Falmouth High School varsity lacrosse team in 1985. After Falmouth, Greg spent a postgraduate year at Wilbraham & Monson School. He then went on to attend Springfield College. At Springfield, he was a two-time All American and is the second leading scorer in program history. Greg then went on to the professional ranks and played five seasons in the National Lacrosse League with the Rochester Knighthawks and the Boston Blazers.

As a coach, Greg has coached for years at the college, high school and club levels. He spent 10 years coaching college lacrosse at schools including Massachusetts Maritime Academy, Nichols College, Ohio Wesleyan University (NCAA DIII Semifinalist) and Colgate University (two time DI ECAC Champion). Greg moved back to Cape Cod in 2000 and coached Barnstable HS from 2001-2009 where he turned their program around making it to the MIAA DI Quarterfinals in 2007 & 2009. Greg also coached at Falmouth HS in 2010-2011 before joining Kings Lacrosse on a full-time basis.

Greg is the founder of Cape Cod Lacrosse, which has been instrumental in the growth of lacrosse on Cape Cod. His summer college leagues, adult tournament and summer youth camps have been running for over 30 years!!!

Ryan began his playing career at Mansfield High School where he was a three-time Boston Globe All-Star, two-time Boston Herald All-star, three-time Hockomock League All-Star and an Eastern Massachusetts All-Star. Ryan went on to attend Springfield College and was starting attack for the pride from 2010-2014. A two-time First Team All-Conference honoree at attack, he finished his career with 96 goals and 54 assists for 147 points, ranking 18th all-time in the program record books. Ryan helped the pride to winning four league championships. Ryan received a degree in Sport Management.

Ryan has been coaching with our high school program and the Cape Cod Kings Youth program for the past five years.

Dave was a four year starting attackman for Newton North High School and a two-time captain and two-time All-American. After high school, Dave was inducted into the Newton North High School Hall of Fame. Dave went on to play lacrosse at Towson University where he was a three year starting attackman, team captain, Division I All-American, a member of the National Championship runner up team and he was inducted into the Towson Hall of Fame. Dave currently coaches Scituate Youth Lacrosse. He is the Kindergarten director/coach, the first grade director/coach, the third/fourth grade director/coach, the seventth and eighth grade skills director and the eighth grade select team coach.

Ryan began his playing career at Mansfield High School where he was a three-time Boston Globe All-Star, two-time Boston Herald All-star, three-time Hockomock League All-Star and an Eastern Massachusetts All-Star. Ryan went on to attend Springfield College and was starting attack for the pride from 2010-2014. A two-time First Team All-Conference honoree at attack, he finished his career with 96 goals and 54 assists for 147 points, ranking 18th all-time in the program record books. Ryan helped the pride to winning four league championships. Ryan received a degree in Sport Management.

Ryan has been coaching with our high school program and the Cape Cod Kings Youth program for the past five years.

Joined Kings in 2020. A native of Yorktown Heights, N.Y., Cunnington was a four-year member of the Springfield College men’s lacrosse team from 2015-18, serving as team captain his senior season. He appeared in 64 career games as a defenseman and earned numerous accolades, including All-NEWMAC first team, All-ECAC second team, and IMLCA All-Northeast Region. Most recently served two season at Western New England University as the defensive Coordinator. Chris is currently the Head Coach at Dennis-Yarmouth High School and a Physical Education teacher in the district.

– Played lacrosse at the Tilton High School in New Hampshire.
– Lower Cape youth lacrosse coach for five years: U9, U11 and U13.

– Member of the Sandwich Youth Lacrosse Board.

Matt Lafond is the Cape Cod Kings 2026 Head Coach. He is a Bridgewater, MA native who played lacrosse at UMass Dartmouth. In his time there he was a 3-year starter at goalie, while getting named NEILA All-Academic in his senior year. He also earned Little East Conference 1st Team Goalie in his final year of college.

– Two time Pilgrim League All-Star.
– Two time Boston Herald All-Star.
– Starting defenseman at University of Vermont.
– Officer of the Falmouth Youth Lacrosse Board.
– Youth lacrosse coach for the past 11 years in both Maryland and Massachusetts.

Defense
– All-State during his playing career at Staples High School in Connecticut.
– Played lacrosse at Lehigh University.
– Played club lacrosse for the past 20 years.
– Coach at Norwell Youth Lacrosse.

Captained team Ireland to 6-0 in div at World Games Perth, Australia (2002) tied for top scorer in division with brother Dan

NCAA Division 1 record holder for goals in a game (11).

Coached at both the youth and high school levels.

PRYL Board Member since 2015-Present

Patriot League Coach of the year 2016

I grew up in Duxbury, playing lacrosse at Duxbury High School (‘07) where I was a part of three State Championship teams. I continued my career at New England College (’11) where I majored in Sports and Recreation Management. As a 4-year starter on the NEC lacrosse team, I was named All Conference my senior year. Since graduation, I have coached at both the youth and high school levels, working as a Varsity Assistant Coach at Marshfield High School and later at Hingham High School. I also coached at the Junior Varsity Level at Silver Lake Regional High School, where I am now the Boys Varsity Head Coach since 2016. I have been with the Kings Lacrosse Program since 2013.

2024 Green Team. From Quincy. Played lacrosse for Kings Coach Nutley at North Quincy and club lacrosse at WPI. Boys Lacrosse Head Coach and math teacher at Weymouth High. This is my 2nd year coaching Kings Lacrosse. Coached football in the past at NQ and Weymouth as well.

In addition to coaching with the Kings, Brian has served as defensive coordinator for the NCAA Division III Massachusetts Maritime men’s lacrosse team since 2014. In 2005 he graduated Bowdoin College where he played four years of lacrosse. He played football and lacrosse at Boston College High School, captaining both teams his senior year. He was the first head coach of the Bridgewater-Raynham Boys’ Lacrosse team and also coached varsity lacrosse for three years at Pembroke High School. After Bowdoin, Brian served as an officer in the United States Marine Corps, he is a veteran of Operation Iraqi Freedom.

Brian is co-founder and chairman of the Beauhawks Foundation and Venue X Media.